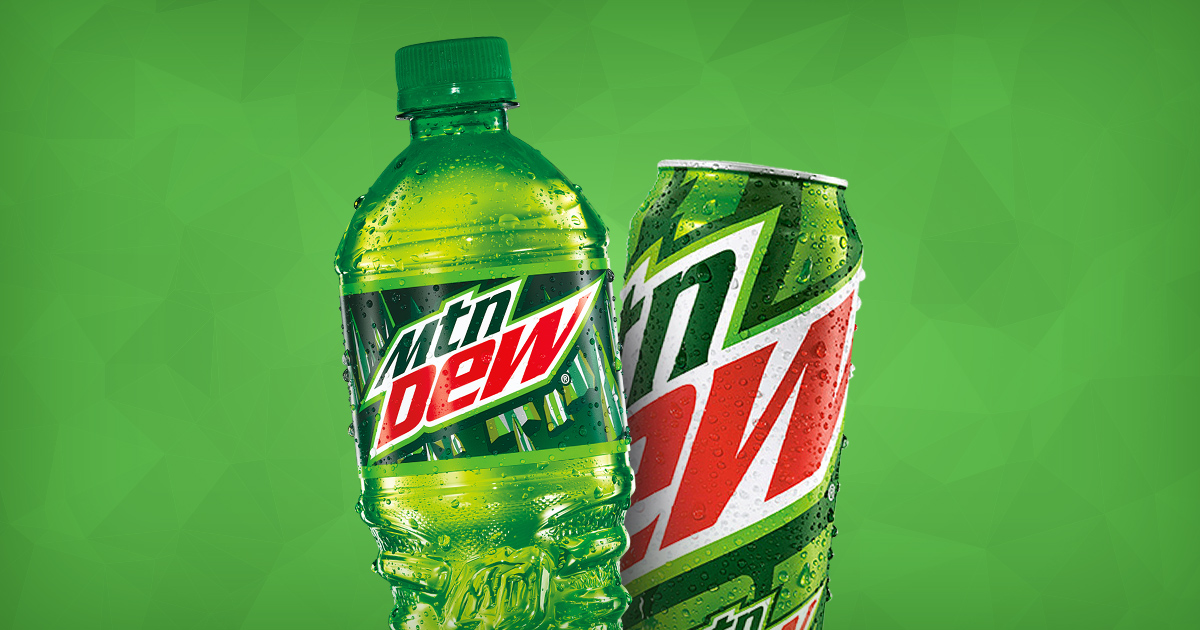 PepsiCo, the parent company of Mountain Dew, owns 22 brands, each worth one billion dollars.

In 2013, a three-part series of advertisements for Mountain Dew landed PepsiCo on every major news channel, and it wasn't good news.

Released March 20, 2013, part one begins with an interracial Asian and African American couple dining in a restaurant when the guy points out a goat at a table on the other side of the restaurant. The goat, aka Felicia the Goat (male), is approached by a White waitress who offers him a Mt. Dew. While refusing the Mt. Dew, he begins to terrorize her by punching her in the head and face. "You're a nasty goat," she yells. Aggressively he snatches the Mt. Dew and in a threatening scruffy voice, he says, "give it to me." After drinking the Mt. Dew, he wants more, "give me more, I want it." The waitress runs away screaming in horror as Felicia the Goat jumps down and runs off yelling, "you're never going to catch me." 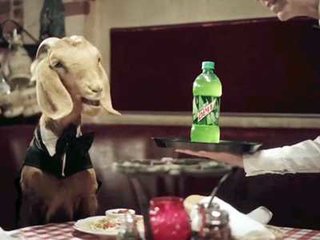 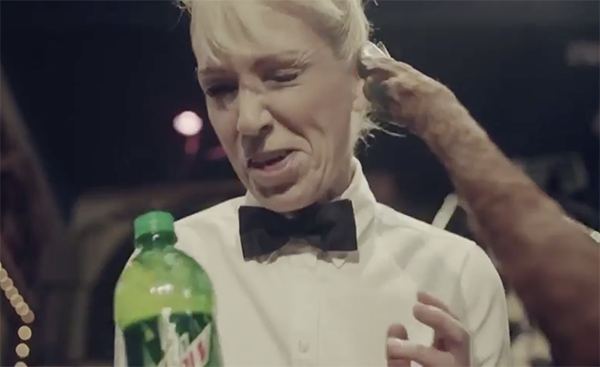 Part two, released a month later, opens with a Black police officer parked on the side of the road listening to loud music while mimicking playing the drums. Felicia the Goat speeds past and then the officer begins to pursue him. Now pulled over, the officer begins to walk up to the car while Felicia the Goat nervously attempts to hide the Mt. Dew as if they were illegal drugs. As the police officer asks for license and registration, Felicia screams, "I don't have anything in the trunk! I know my rights." The police officer proceeds to open the trunk and sees that it is full of Mt. Dew and says, "OMG, looks like we have a clear case of Dew U. I." Felicia is now running down the road away from the car as the officer yells "hey, get your bald ass back here, nasty ass goat." Once again, the ad ends with Felicia the Goat yelling, "you're never going to catch me." 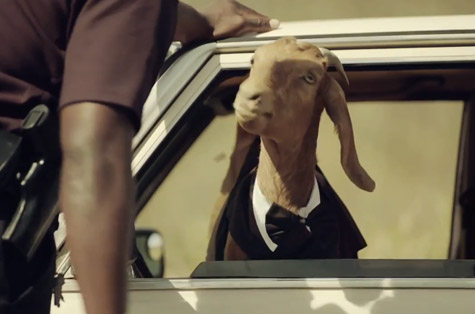 The final part of the series was released on April 24, 2013 on the creator's blog asking, "will Felicia get caught by the waitress he attacked in the first commercial?" It opens with Felicia the Goat in a police lineup with five other Black men looking hard core and portrayed as if they are gang members or thugs. On the other side is the waitress who is all beat up with a brace around her neck, on crunches, and bloody bruises all over her face. The detective stands next to her while aggressively encouraging the her to pick someone from the lineup. "Nail this little sucker, come on! Which one is he? Point to him!" 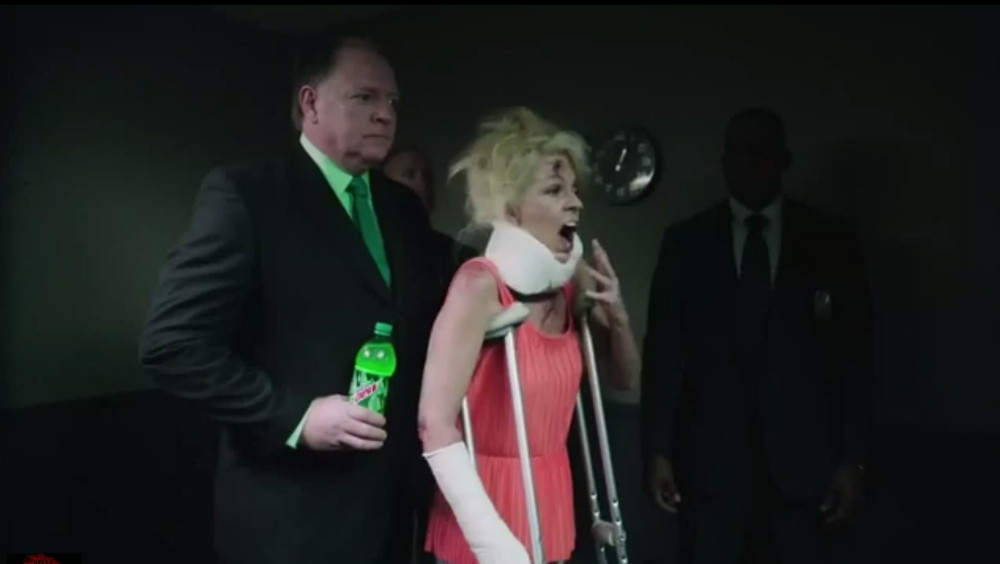 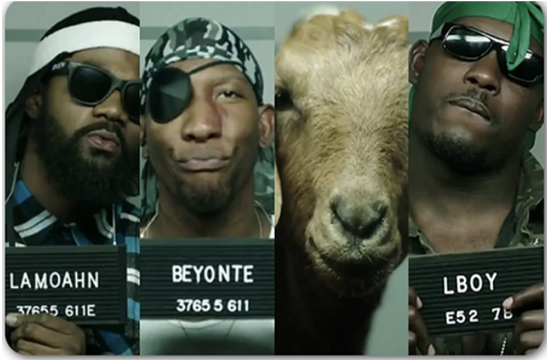 Under his breath, Felicia the Goat says, "It's me. You should have gave me some more, I'm nasty," as one of the suspects throws up what appear to be gang signs. In terror, "I don't think I can do this!" she says. "It's easy, just point to him," encourages the detective. "You better not snitch on a player," Felicia threatens. Still urging her, "he's wearing the dew rag." "Snitches get stitches fool," warns Felicia. "Come on, it's the one with the four legs." Even more intimidating, "You thought you were going to catch me. Keep your mouth shut, keep your mouth shut. I'm going to get outta here and I'm going to Dew you up." The entire time Felicia is antagonizing the waitress, the waitress is shaking in fear and screaming, "No, no, I can't do this!" As she continues to yell, she hops out on her crutches in horror. The detective takes a sip of Mt. Dew and says, "She just gotta Dew it." For the third time, the ad ends with Felicia the Goat yelling, "You're never going to catch me."

Now let’s view the ad through the lenses of society. Felicia the Goat – abusive aggressive scary Black man; an animal that we have to protect our precious White women from. He gets one taste of the Mt. Dew and suddenly he is addicted to it like a crackhead getting his first hit. He is aggressively out of control and begins to hallucinate from the "drugs." The White waitress runs away because she is afraid of the animalistic Black man. He runs off yelling, "you’re never going to catch me," like Black men that run after committing a crime. After all, "they" all run and they all are threating rather they are running towards police or away from them.

In part two, we now have a Black police officer not doing his job; just bullsh**ting in the squad car. He will eventually lose that good job that was given to him. Once pulled over the Black man defensively yells, "I don’t have anything in the trunk," because we know they always have illegal drugs in the trunk. If not, the police will probably plant something. "I know my rights," you know that noise from the disruptive protestors of the Black Lives Matter movement. The police find all the drugs in the trunk, just as expected. He is eager to charge the black man with a DUI, but the Black man is running away as usual. Again, he yells, "you’re never going to catch me," after all, "they" all run and they all are threatening rather they are running towards police or away from them.

All the men are Black in the line-up in part three. That is because most Black men are criminals, thugs, gang bangers, abusive, and anything else negative to society. As "Jail line-up Julie" attempts to identify the abuser, the detective nonchalantly encourages her to pick any one of them. It does not matter which one because they are all criminals. The actual criminal in the lineup admits to the crime but threatens Julie that if she picks him, he’s going to beat her and probably rape her when he gets out of jail. Once again, Julie is so afraid of the angry Black man behind the glass, that she runs away without picking him out. Again, he yells, "you’re never going to catch me," because they always get away, so we have to catch everyone we see and lock them up rather they did something or not.

Even though the first ad promoted violence against women, interestingly enough, the first two ads in the installment were received well. According to AdWeek, "Mt. Dew makes the best ad ever with a violent talking goat." However, the third ad received harsh criticism. So much so that Dr. Boyce Watkins, author, economist, social commentator, and former finance faculty at Syracuse University, declared the Mt. Dew ad as "arguably the most racist commercial in history." In the viral article on yourblackworldnews.net, Dr. Watkins stated, "Mt. Dew has set a new low for corporate racism. Their decision to lean on well-known racial stereotypes is beyond disgusting." Less than 24 hours after this article was release, Mt. Dew apologized and took the ad down.

Their first apology was very similar to Dove’s "missed the mark" apology:

"We understand how this video could be perceived by some as offensive, and we apologize to those who were offended...We have removed the video from all Mountain Dew channels and have been informed that Tyler is removing it from his channels as well."

Note that Mt. Dew apologizes to "those who perceived the ad as offensive," but not to the fact that they created and released a racist ad. Furthermore, using the word "perceived" is another way of saying, we didn’t think it was offensive, but to the over sensitive people who thought it was offensive, we apologize to you so that you will shut-up and keep purchasing our products.

Obviously many others felt the apology was "hopeless, like a penny with a hole in it," because Mt. Dew quickly issued a second apology:

We Apologize for this video and take full responsibility. We have removed it from all Mountain Dew Channels and Tyler is removing it from his channels as well.

They even purchased promotional space on Twitter to spread their apology. You may have seen a tweet show up in your newsfeed from Mt. Dew: "Hey guys – made a big mistake we’ve removed the offensive video from all our channels. #fail 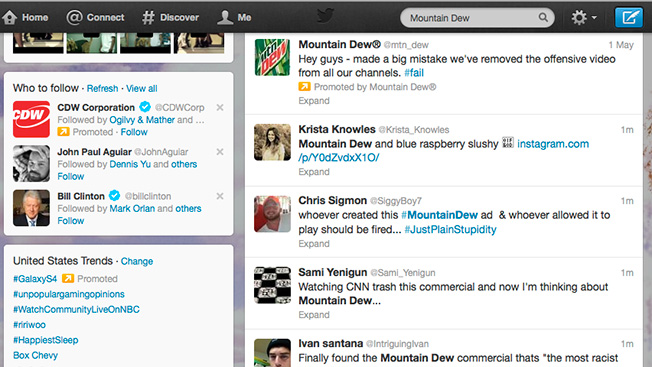 Not to be hyper-critical, but Mt. Dew still refuses to say "we" or "I" made a big mistake.... As always, the apology should make you forget about the entire racist stereotypical ad and go on with your life as if nothing ever happened, until the next racist ad is released. Chris Sigmon, a twitter user, said, "whoever created this #MountainDew ad & whoever allowed it the play should be fired.... #JustPlainStupid." Yuriy Boykiv, CEO of Gravity Media, agreed, "buying ads for the apology is not a smart thing to do unless they are just asking for more publicity."

However, marketing professionals Sabrina Horn, CEO of Horn Group, and Jason Stein, former president of Laundry Service, a social media agency, both agree that purchasing Twitter promotional space shows how sincere they were about their apology. Sabrina Horn said, "The instances where companies hesitate to respond or don't admit fault are the ones we remember forever." 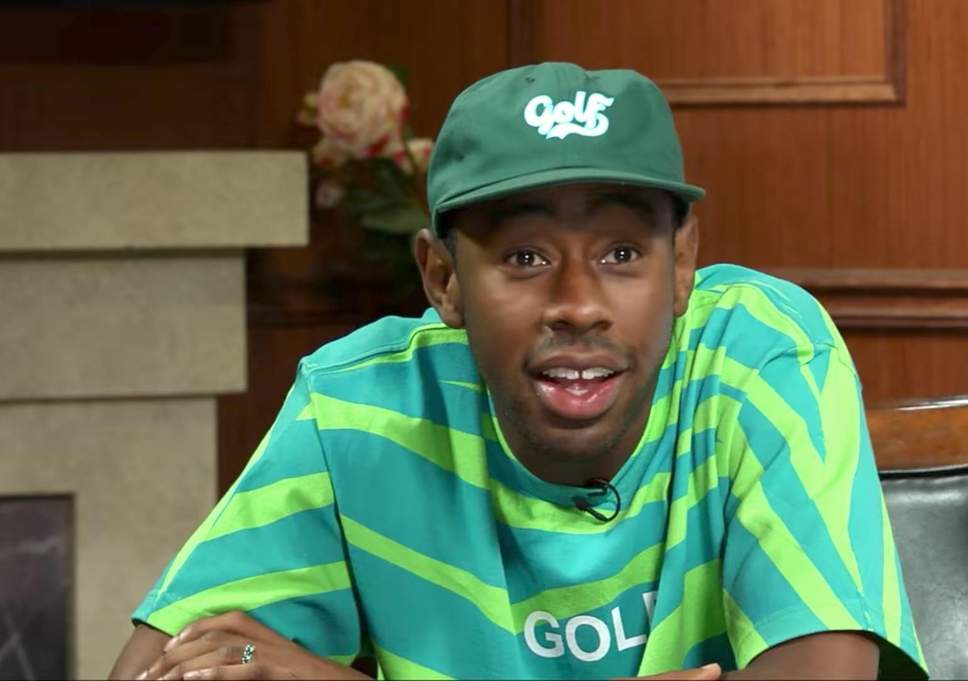 Tyler, The Creator says that PepsiCo was on board with the ad from the beginning and gave him full control. In an interview with Larry King, Tyler said Mt. Dew should have backed him up because they knew it was not any negativity behind the ad. After the ad came under question, Tyler, The Creator did not apologize, instead, he stood by his concept and creative decisions. He said that the advertisement made sense in the context. He even solicited a tweet to Dr. Watkins inviting him to have a conversation with him. "I would love to have a convo with @drboycewatkins1."

The next day, they did have a conversation over twitter. "Studied your music, I have an altered perspective [but], still could do without the ad, but I think you were well-intended. #respect."

That afternoon, in an interview with Billboard, Tyler, the Creator was given the chance to defend himself. "It was just a goat who liked Mountain Dew. He wanted more. The waitress lady got hurt. He got pulled over by the cops, and the lady points out the goat [in the line-up], who obviously attacked her because of the Mountain Dew. And that's it." It was clear that the rapper did not mean any harm, although he was naive.

By the next morning, Dr. Watkins had read the article and posted a 22-minute video giving his opinion about Tyler and the article. Although he expressed his respect for Tyler as an artist, he stated, "When it comes to that ad with all the stereotypes that were being presented to the American public, [who made the ad] doesn't change what the public sees. [I still feel] the ad is not OK." 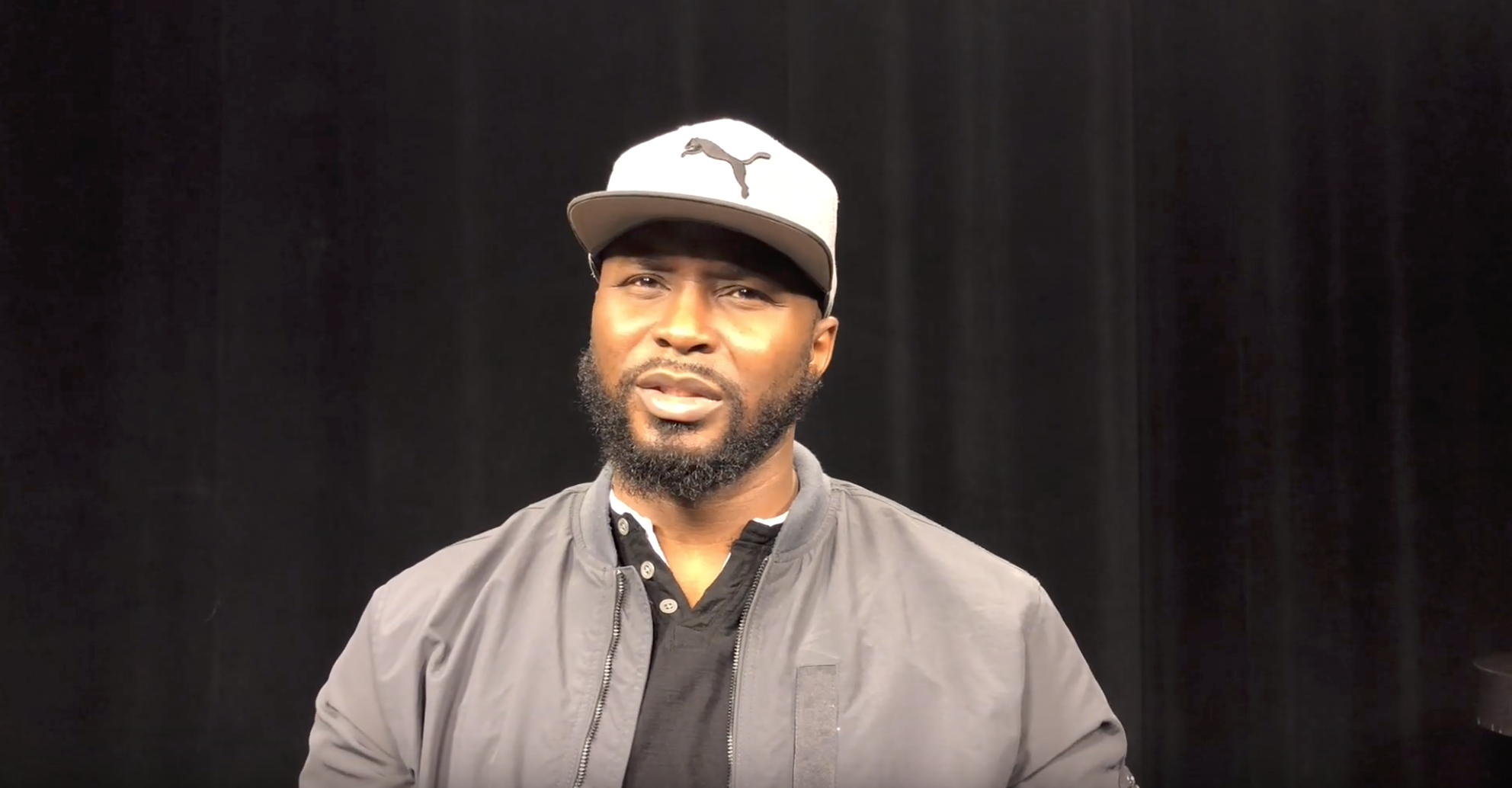 Dr. Emeka Anaza, professor of sports and recreation, responds to stereotypes in the Mountain Dew ad and the issue of accountability from his perspective as a black man.

University student Jasmine Holliday shares her impressions of the Mountain Dew ad from her perspective as a black woman.

Adrienne Hooker, professor and visual designer, shares her analysis of the stereotypes in the Mountain Dew ad from her perspective as a white woman.

Dr. Chen Guo, professor of interactive media and user experience design, responds to the Mountain Dew ad from her perspective as a Chinese woman.

Apologies after-the-fact are not enough. Ads like these make it to publication, in part, due to a lack of diversity on development and executive teams. Ad agencies very often exhibit an abundance of insensitivity and a predilection for stereotypical personas when designing ad subjects. The bottom line is, there is an urgent need for diversity - more people of color in advertising agencies and as ad executives. Lack of diversity divides us.